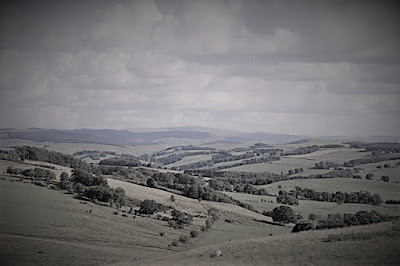 all stocked with food (though most of it in cans).

Expensive imports rotted on the shelf -

beyond the reach of even those with wealth.

and though it made our food taste quite delicious

using garlic now was deemed to be suspicious.

and for a very special birthday feast

toast with Marmite made with brewer’s yeast.

Ah! How did England come to such an hour

when there is no more sweet, but only sour?

all luxury cuisines from times gone by -

their cookbooks added to the growing pyre

of publications heaved into the fire,

alongside poems, novels and non-fiction

that utilised too smart and clever diction,

not to mention any writing in translation

(unsuitable stuff for a sovereign nation).

The poles of taste were well and truly shifted

and art and music too were strictly sifted:

and no abstraction, no “expressionist crap”.

in no uncertain terms were told to feck off.

were banned for using non-traditional metre

and stories written by Yanks or from abroad,

What joy it was to be alive when culture,

thrown aside, was left for hungry vultures!

And not the kind who jewellery they’d rattle

or stand in foyers, glass in hand, and prattle

while nervous actors waited in the wings -

but those who aim to strip art to the bone

and leave it standing on the brink, alone.