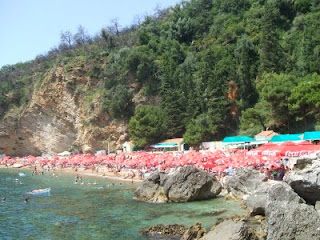 Posted by Tom Phillips at 13:25 No comments:

A small beach in Montenegro

Originally published on-line by Various Artists. Reposted here with thanks. Tom Phillips
Posted by Tom Phillips at 12:37 No comments: 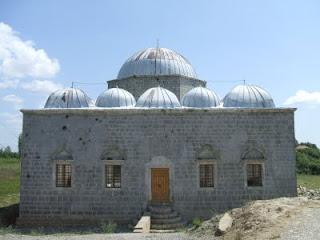 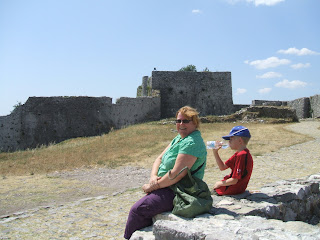 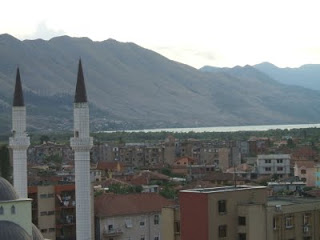 Shkodra: The now abandoned Lead Mosque (top); inside Rozafa Castle (middle) and the view across Lake Shkodra towards Montenegro (bottom).

Posted by Tom Phillips at 12:25 No comments:

The legend of Rozafa Castle

What's left of Rozafa Castle stands on a rocky promontory just outside Shkodra in northern Albania. It overlooks the flood plain where, before the river burst its banks one too many times, a bazaar used to be and where the only sign of this stretch of damp, flat land's former life is the hollow carcass of a mosque. A taxi driver will take you up the steep twists of the castle approach as far as a car park just below the gates or you can walk from the musty, communist-era hotel in the centre of town, stopping at the rank of new shops and cafes on the outskirts for a coffee and an ice-cream in a novelty 'Punky' plastic figurine. Across the dual carriageway, a lane lunges up in zigzag slashes across the promontory, past walled orchards and a primary school which still has communist slogans pebble-dashed into concrete blocks in the playground.
Rozafa is one of Albania's effectively impregnable citadels. Its history involves numerous sieges and, in the fifteenth century, it was the last fortress to surrender when the Ottoman Empire was crushing the rebellions inspired by goat-helmeted Albanian warlord Skanderbeg. When Rozafa castle fell, Albania was consigned to Ottoman occupation until independence in 1912.
These days, Rozafa is the domain of school parties who plod around the ramparts clutching garish flags and flocks of in-bred pigeons which hobble across the courtyard by the castle museum, their feet hidden by strange sprays of grey feathers. The views are spectacular, there's a chapel which became a mosque and then became a chapel again, and the castle bar is staffed by boys reluctantly wearing traditional dress. Access to the museum is determined by the electricity supply. When there's no power, you'll get in for free but you won't be able to see anything.
The legend of Rozafa is the story of the third builder's wife. Three brothers, it seems, were building the castle but the section of the wall they were building repeatedly collapsed. At the end of their tether, they were relieved when an Albanian version of a djinn turned up and offered a 'deal'. The wives of these three brothers came up to the castle every day, bringing lunch. Should the first wife to appear the following day be incarcerated in the wall, the castle would be finished. The djinn asked the three brothers to swear that none of them would forewarn their wives. They did so but two of them, of course, immediately broke their promise and told their wives to stay home all day. The third, though, kept his word and, the following day, watched while his wife toiled up the promontory to deliver his lunch. He promptly told her that she was the one who had to be immured to guarantee the completion of the castle. Remarkably, she agreed (or was forced) but only on the grounds that, since she had a young baby to feed, a small hole would be left in the wall, through which she could breastfeed her child. Even to this day, milky water is said to seep from various holes in the walls of Rozafa castle.
Posted by Tom Phillips at 13:37 No comments:

Ornithology in the Balkans

Ornithology in the Balkans

It wasn't the Muslim weddings that took our eye
on that alluvial floodplain so much
as bent-wire cages under every tree,
goldfinches' less than common soliciting
beside trapped black squirrels and a dove.
At xhiro hour, along streets of dark stairwells,
the hawkers were out, their not so fair trade
drawing buyers who swooped on bargains
and took promises of health and long life
as just so much hot air. On the fly,
you might have been taken in
by flashes of iridescence or plain song.
Above the mountains of another country,
the rumoured eagles were predominantly crows.

Because, at one time, there was more
than some doubt, above the disputed town,
its castle flaunts a history of sieges
in so many collapsing balustrades,
and the milk-white dribble between stones
which is said to seep from the breast
of the wife sacrificed to complete it.
Across the promontory's ruined terrain,
we were trying to work out which wall
had belonged to which religion
when, against the faithless sky,
a squadron flew in: dandyish pigeons,
bred for it, stumbling around,
hunting down a roost in feathery galoshes.
Posted by Tom Phillips at 15:07 No comments:

At this stage, a broad statement of intent would be unwise. Suffice it to say, the putative title of this blog was going to be Working Progress, something of a hedge between work-in-progress and a broader, vaguer optimism - but that had already been snaffled by someone else and, on reflection, it does rather sound like the title of a particularly bland Labour Party manifesto. Perhaps, in fact, the Labour Party were the ones who snaffled it first.
I imagine, then, that the contours of this 'whatever it is' will emerge over time but, for the moment, it will mainly feature bits and pieces of writing which will probably be by me but which might well also be contributed by other writers later on. These bits and pieces - poems, fiction, theatre, travelogue etc - may be in a more or less finished state. That depends. Sometimes it's interesting to see work-in-progress; other times it isn't. Likewise, it's sometimes interesting to read about the process behind a piece of writing and, at other times, that can be as dull as the dullest ditchwater. Or, indeed, that metaphor itself. Other posts might not have anything to do with writing at all.
What this won't be, however, is a wide-ranging blogzine like the continually thought-provoking Eyewear (http://www.toddswift.blogspot.com/) or a blogsplurge of dietary habits, relationship stress and what happened on 'The X-Factor' this week. Recreation Ground sits somewhere in between, like an underused all-weather tennis court beside the mainline between Euston and Glasgow, exactly, in fact, like the underused all-weather tennis court which sat beside the mainline between Euston and Glasgow at the head of 'the rec' in the village where I grew up. Just down the slope is the 'impossible' (or, more accurately, pointless) cricket pitch carved into the side of a hill and the knackered old pavillion with a stopped clock sitting like a cake decoration above a verdigris-scrawled balcony.
Today I ate sausages for lunch and tried to upload my wife's photograph to her Facebook account.
Posted by Tom Phillips at 14:13 1 comment: