Things that are on

Sat 21 Sept: Balkan Peace Park Project AGM, Kings College, London, from 2pm. Ffi:http://www.balkanspeacepark.org/news.php - all welcome.
Sun 22 Sept: DANSwithMe Bristol 2 - an afternoon of solidarity with the anti-government protestors in Bulgaria on Bristol Harbourside, also from 2pm:https://www.facebook.com/events/507435076008991/ - all welcome again.
Tue 1-Sat 12 Oct: '100 Miles of North of Timbuktu' - Theatre West stage my play about three chancers who accidentally find themselves with the power to play God:http://www.almataverntheatre.co.uk/theatre/what-s-on.html
Wed 16 Oct: a scene from 'Man Diving' gets read as part of BOV's Open Session fortnight.
24 Oct: me talking about travelling in SE Europe at Stanfords bookshop as part of Bristol Festival of Literature: http://unputdownable.org/event/on-the-road-off-the-page
11-15 Nov: 'Deeds Not Words': Ship & Castle debut another new play, this time about the Suffragettes and the Edwardian government.
Posted by Tom Phillips at 12:36 No comments: 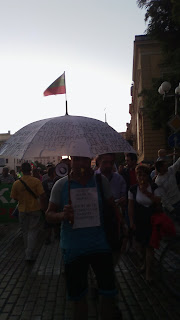 Running through the centre of Sofia are the 'yellow pavements'. A wedding present for Tsar Ferdinand from the Austro-Hungarian monarchy, they're sturdy enough to have supported the rolling tanks of communist Bulgaria's military parades. Now they are the scene of anti-government protests which see thousands of people taking to the streets to demonstrate against the all-too-familiar triumvirate of power, corruption and lies. Even though the protests are soon to reach their 100th consecutive day - on the Monday after the 105th anniversary of Bulgaria's declaration of independence on 22 September - media coverage outside Bulgaria has been, at best, sporadic. This, it seems, is because, in the early days of the protests, the few foreign correspondents that the west European media still employs were engaged with the Edward Snowden story and because editors were unwilling to commissions stories about protests which don't involve 'violent clashes'. Tellingly, media interest peaked on Day 40 when protestors blockaded the parliament building in Sofia, trapping MPs inside - the only action to result in wielded batons and bloodied heads. It would seem that, if you want to attract the west European media's attention, the most effective course of action is to start ripping up paving stones.
Such a course of action, though, is not characteristic of the Bulgarian protests. Despite years of anger and frustration, the protestors remain peaceable, warm, good-humoured. Last Saturday (Day 84), a national holiday, there were fewer people out on the 'yellow pavements' than normal, but the street was still packed with protestors of all ages, from toddlers to students, parents to pensioners. The message to the Bulgarian government is simple: 'Octabka' (resign) - a word chanted over and over, to the accompaniment of drums, whistles and horns, or written on banners, cards or pieces of paper sellotaped to lampposts. People carry umbrellas: in Bulgaria, spitting is a metaphor for lying - and the protestors feel they're being rained on by watery lies. At the protestors' camp outside Sofia's second parliament building, we stop. Beside bubble tents and two pianos, the umbrella contingent line up at the railings guarded by unsmiling police. A stationary crescendo of drumming, whistles, horn-blasts and boos gives way to the Bulgarian national anthem, sung acapella. And then everyone sits down. It might be the start of an urban picnic. What it is is one minute's silence in memory of Georgi Markov - the Bulgarian journalist killed in London in the 1970s by a pellet of ricin delivered by the tip of an umbrella. The centre of Sofia is at a halt. Later there will be beer and ice-cream, and someone playing one of the pianos, a model of a communist-era building made from empty coffee cups. For now, there is silence on the 'yellow pavements' - and soon it will be Day 100.

WWW.NORESHARSKI.COM POSTS REGULAR UPDATES IN ENGLISH ON THE BULGARIAN PROTESTS.
Posted by Tom Phillips at 12:53 No comments: