An old UHER tape recorder with grille front,
gear-stick controls, red stripe on the monitor
warning of distortion and unusable testimony:
we trained on these, lugged them out to gauge
public opinion about the morning headlines,
asked interviewees to switch off fridges
while we tested levels with a question
about what they had for breakfast.
Banks of them charged in a cabinet
and you’d know which one was reliable,
which one might snarl no matter how
carefully you threaded the sprockets.
Dun tape fed through at seven and a half inches
per second: fifteen minutes to the spool.
In that time you had to get the story.
And now, behind glass, it squats there –
analogue dinosaur beyond its sell-by date.
This one was found in the House of Leaves,
chosen by the regime in Tirana to record
interrogations. Every week or so,
someone must have done what I did
and wiped accumulations of dirt
from the playback and recording heads. 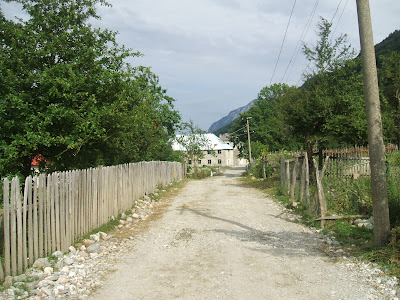 For the last few months I've been writing a regular column for Bristol 24/7 magazine. They're all (sometimes rather tangentially) connected to walking in one way or another - things I've seen walking through the city, unexpected places I've ended up etc. There are links to a few of them here:
A short, sharp stab in the sole
At the pointy end of Spike Island
The art of walking
A load of dead men peeing
The ideology of our zebra crossings
Posted by Tom Phillips at 01:13 No comments:

Another 'Unknown Translation', one of these poems originally written in Bulgarian and then translated into English emerged unexpectedly ...

The men continue to gather
in the squares and streets of the town.
Why are they here? They say they’re waiting
but they don’t know what for. The women
have decided to leave them and look for
a different name for contentment.
The children have gone with them,
they've accepted their fate.

The dark sky descends from the mountains
to warn those who will listen
that there has been a mistake. The sea
promises to build castles of sand
and to destroy them again every night.
Outside the doors of offices,
we grow frightened for no reason
and write silent letters in smoke.

Nobody remembers when this began.
The airport’s full. We want our things,
the things we need, but there is
nobody we can ask.
If only some definite disaster
had appeared, if only we could
foresee when it would happen
or where it would end.

Everything we’ve lost
returns to the squares and streets
where we have to wait
while the men decide to apologise
and ask the women to come home.
Under the clouds the children play
with new friends on the beach
where the sea no longer sings.

Posted by Tom Phillips at 06:12 No comments: