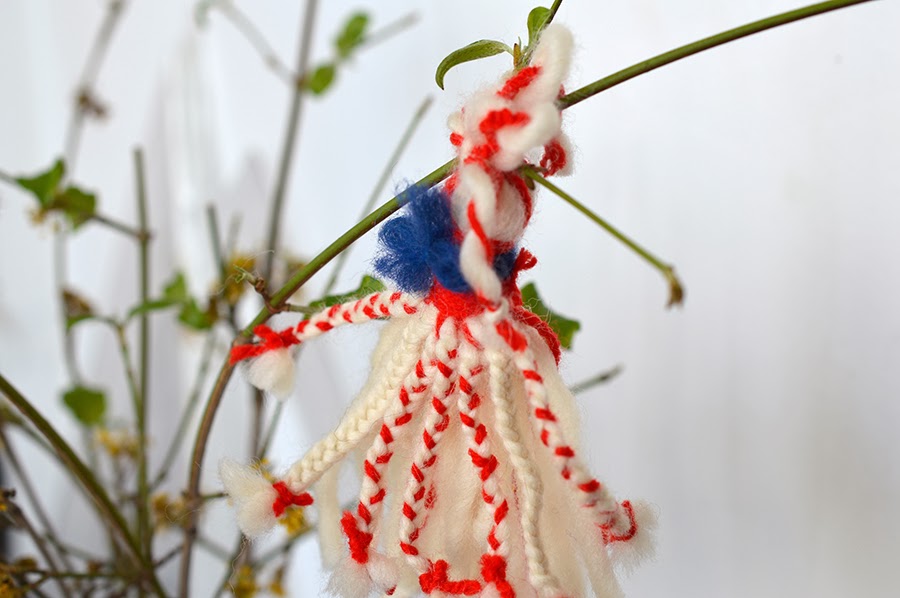 Tomorrow (1 March) is Baba Marta or March Day in Bulgaria, when people mark the end of winter by giving martenitsi (red-and-white amulets) to friends and family - and so this week our Anglo-Bulgarian collaborative project Colourful Star features two paintings for spring and photos of handmade martenitsi by Marina Shiderova alongside a short prose-poem by me. You'll find the full post here.

Posted by Tom Phillips at 03:07 No comments:

To be facing it,
or the thought of it,
that sedimentary arrangement
of books and papers and scribbled notes.

It’s what brings into question
assumptions about why
it’s OK that, in here,
I’ve got plastic boxes filled
with CDs, photograph albums,
my parents’ wedding-gift cutlery set.

Well, they don’t –
but there’s a chance
you might know what I mean,
standing here, looking for order,
in this room I thought I knew,
in this unglossed museum
to a now that’s only so recently deceased.

Here, on this pavement,
with compromised survivors,
wearing losses like badges,
listing off what they’ve seen,
(what they have seen),
I’m tempted to ask
the simplest of questions:
is it her who’s broken your heart?

Something’s not right.
At the mouth of a cinema,
language and neon
are letting us down:
they’re marking out silences,
as if in some unmapped forest
we’re surrounded by watchtowers
and boundary fences.

Not so much geography as time
intruding – or unseasonal chill
that draws steam from our mouths:
it’s pushing you apart.

Precipitate friend, we’re
already at the station,
safe among strangers
you can choose to register
as little as not.

So how should I care
for your wanting
to make things up?
At the end of the line
she'll not be waiting
in those shoes, that skirt.

You know that, don’t you,
in this cold late spring –
but it won’t stop you
queuing at the window,
buying your ticket,
falling back on hope
and remembered bus routes.

At the barrier, you persist
in giving nothing away –
you’ve decided
you’ve got enough to go on:
magazines, bottles
of branded water …

I’m just here reading titles,
inadvertently wondering
if it is as you say
and you’ve answered
the same questions yourself.


In Britain, today (14 Feb) is best known as St Valentine's Day, but it's also St Trifon's Day - a celebration of all things wine-related in Bulgaria. Here's a short excerpt about visiting St Trifon's cathedral in Kotor in Montenegro five years ago 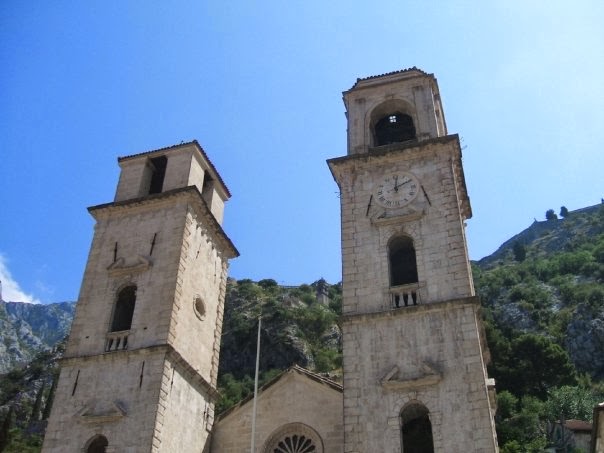 The temperature kept us on the move. Constructed of pale limestone worn to a shine, the buildings and pavements reflected the sun’s heat back at us, and even the shadowed alleys, which ran between the old town squares like the filigrees of solder connecting transistors on a circuit board, were stifling. It was a dry, static heat, untempered by a breeze or the mixed blessing of humidity. We tried to shelter from it in one small church after another, but most of Kotor’s many places of worship were closed and we ended up wandering from locked medieval door to locked medieval door until we reached the largest building: the twin-towered Catholic cathedral of St Trifon. Here, in the porch, stallholders sold rosaries, pictures of Our Lady and crude metal trinkets, much as pardoners had sold indulgences in the Middle Ages. The door was open, though, and inside, amongst tall columns which looked too slender to support the vaulted ceiling, the air was cool. Several idiosyncratic monuments embellished the nave: a statue of a pilgrim with a gaping sore in his leg (St Trifon’s powers extended to miraculous healing); a stone chest which held the remains of the cathedral’s ninth-century founders; and a glass case containing a mummified nun whose face had been hidden behind a ghoulish plastic mask. The reliquary proper was up a flight of stairs. This was where the church kept its most precious treasures: a large stained wooden crucifix, the almost inevitable splinter of the True Cross and the skull of St Trifon himself, which, even though the sainted healer had been executed in distant Nicaea, had somehow ended up in Kotor, presumably in the luggage of a returning crusader. A number of mobile plinths attested to the fact that the church regularly paraded these relics through the streets. At the foot of the stairs, someone had pinned up some photographs from the previous year’s Nativity play. Three small boys wore large fluffy cotton wool beards, simultaneously impersonating the Magi and gently parodying the hirsute local clergy. A notice stated that the cathedral had been founded in 809, but had only been completed in 2008. The building’s history of construction, destruction and reconstruction was more complex, however. Although there had been a Catholic church on the site in 809, this had been replaced by a much larger cathedral in the twelfth century, which, in turn, had been destroyed or severely damaged by a number of earthquakes. The most recent of these seismic assaults had hit in 1979. Its epicentre had been in the south, close to Ulcinj and Bar, but it had caused devastation along the entire Montenegrin coast. The old towns in both Kotor and Budva had been flattened, and it was presumably the restoration work St Trifon’s needed after this particular cataclysm which had only been finished in 2008. Ornate and impressive as the cathedral was, not even the slowest of architects and stonemasons could have taken nearly 1,200 years to build it from scratch.

Today is both St Trifon and St Valentine's Day - so we've got paintings and poems of love and wine on Colourful Star this week - you'll find them posted here now: http://msvstp.blogspot.co.uk/
Posted by Tom Phillips at 03:57 No comments:

At the Holiday Inn, Sarajevo 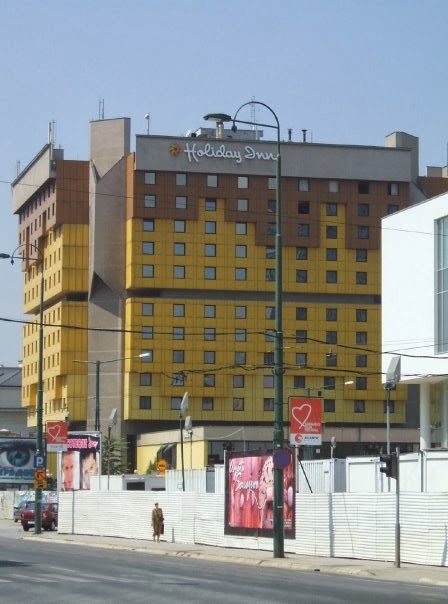 On staying in the same hotel as Torvill and Dean etc
In the distance, Sarajevo looked like Mostar, but on a bigger scale – a tightly packed city, encircled by mountains, easy to besiege. When the men with hammers gave the all-clear, the train slowly rumbled between tower blocks and came to a halt in another large but empty station. About two dozen passengers got off and walked through the ambitious foyer to the street. Not far away, the ochre cube of the Holiday Inn nosed above the concrete horizon. Built for the Winter Olympics in 1984, it achieved notoriety during the civil war as the only hotel to stay open throughout the four-year siege. Journalists set up satellite phones and fax machines in their rooms and reported on the exchanges of rifle fire and mortar shells between the Bosnians in the city and the Bosnian Serbs on the surrounding hills. The road dubbed Sniper Alley ran directly in front of the Holiday Inn; the only way in and out of the building had been through a service door at the back.
‘You’re not even going to think about staying anywhere else, are you?’ said Sarra as we stood in the station forecourt.
‘It’s handy for the train.’
‘Except that you want to go there so you can say you’ve stayed in the Sarajevo Holiday Inn, just like Jeremy Bowen and Martin Bell.’
‘It was too close to the frontline for Martin Bell. He had his own apartment.’


‘Trust you to know that.’
...
That night, the three of us sat in the foyer of the Holiday Inn. The only other customer at the raised circular bar was a receptionist who’d just come off shift. Nobody said much. The barman printed off his till receipts and sat at a table, typing figures into a laptop. It didn’t take him long. While Sam sucked up the last of his Coca Cola through a straw, the receptionist got up, walked over to the fountain and turned it off. Backlit by the streetlamps outside, she returned across the polished floor, the purple and beige atrium towering above her. She looked up just once, registered the five Olympic rings high on the wall, then put on her coat. The barman caught her eye. They’d both worked there for years. They smiled at each other, said goodnight. As we got up to go, the barman came to collect our glasses.
‘It hasn’t always been this quiet,’ he said.

House on the Hill

The third instalment of the ongoing Colourful Star collaboration, House on the Hill, is now posted - a landscape by Bulgarian artist Marina Shiderova and a short poem written in response by me. You'll find it here.
Posted by Tom Phillips at 02:22 No comments: