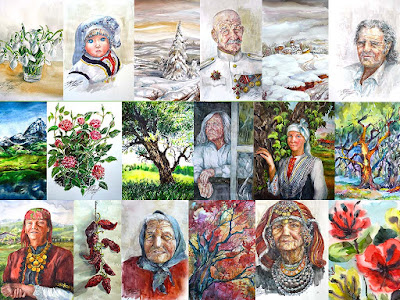 Colourful Star - the blog I also run with the Bulgarian artist Marina Shiderova and her sister Vasilena - has been online now for close on 18 months. Every Friday we publish a new painting and poem in a sort of ongoing conversation between a young Bulgarian painter and a not-quite-so-young English poet which, from time to time at least, unearths unexpected connections and common ground. This week's post - our 77th - combines a kitchen still life with a poem about learning the Bulgarian word for aubergine and you can click through to it here. There are many other collaborative pieces on the site - on subjects ranging from monasteries to Shakespeare, the Cyrillic alphabet to pumpkin soup - so do feel free to have a look around.

There have been some other developments with projects connecting with SE Europe. The summer issue of Modern Poetry in Translation will include translations of poems by Iliyan Lyubomirov which I've been working on with Iliyana Mircheva and Tsvetomira Peykova. Iliyan published his debut collection Нощта Е Действие in Bulgaria last autumn - a collection which has seen him win one of Bulgaria's most prestigious literary prizes, 'Southern Spring', and attract what to a poet in the UK can only seem an unimaginably huge readership. Our translations will be the first to appear in a UK-based journal and hopefully we will be able to find a publisher for the English version of the full collection in the near future.
Further translations of contemporary poetry from Kosova, Albania, Bulgaria and Serbia will also be appearing later in the year in a feature for Jacket 2 which will look at the work of some of the many poets I've encountered in SE Europe in the last few years.
It's very heartening to see an interest in the region's diverse cultures emerging again. It isn't impossible, of course, to find translations of contemporary writing from SE Europe, but even in the internet age they can sometimes be difficult to track down and the work of the latest generation to start publishing in the region is certainly all but invisible to the English-speaking world. In the interim, of the books recently come across, I'd certainly recommend these:
At the End of the World: Contemporary Poetry from Bulgaria, ed. Tsvetanka Elenkova, trans. Jonathan Dunne (Shearsman, 2012)
A Balkan Exchange: Eight Poets from Bulgaria and Britain, ed. W. N. Herbert (Arc Publications, 2007)
Lightning from the Depths: An Anthology of Albanian Poetry, ed. & trans. Robert Elsie and Janice Mathie-Heck (Northwestern University Press, Evanston, Illinois, 2008)
Under the Banners of Melancholy - the collected literary works of 1930s Albanian poet Migjeni, trans. Robert Elsie (Centre for Albanian Studies, London, 2015)
The Horse has Six Legs: An Anthology of Serbian Poetry, ed. & trans. Charles Simic (Graywolf Press, St Paul, 1992).

The collage at the top of this post is by the Bulgarian artist Marina Shiderova: you can see more of her work here.
Posted by Tom Phillips at 04:46 No comments: