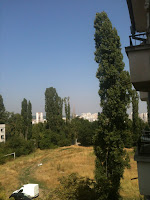 Having lived in Sofia for close on a year, it seems apposite to put together a little pamphlet of poems that I've written in the city. The majority of these have already been made public in one way or another - the first few are revised versions of poems originally written while I was a translator-in-residence at Sofia Literature and Translation House and published in Raceme magazine thereafter, while quite a few others first saw the light of day on the Colourful Star blog with accompanying paintings by Marina Shiderova. Some were originally written in English, others continue the thread of 'Unknown Translations' (my 2016 book published here by Scalino) and were originally written in Bulgarian. Putting together a little self-published pamphlet is always a dangerous game and so I'd particularly like to thank Peter Robinson for taking the time to offer invaluable editorial advice. Hopefully, you should be able to download the PDF version by clicking here.
Posted by Tom Phillips at 10:05 No comments: 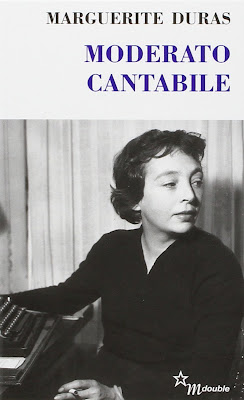 Moderato Cantabile – Marguerite Duras
This was actually a set text for my French A-level back in 1980-2 and I’m eternally grateful to the exam board that put Duras on the curriculum. For that exam board, it can’t have been the most obvious of choices, but it had a big effect on me and meant that I spent many long hours during our visits to France over the course of the next twenty years tracking down other Durassian tomes, many of which haven’t been translated into English or indeed published more than once in small editions. Not everything Duras wrote falls into the ‘genius’ category, by any means, and the films are a bit wobbly, to say the least (although Gerard Depardieu’s turn as a washing machine salesman in one of the early ones is quite something) … but she’s probably taught me more about writing than anyone else and continues to engage and intrigue whatever she happens to be writing about.

The Successor – Ismail Kadare
The first one by Kadare that I came across … The lesser-known ‘The Concert’ is probably my actual favourite novel by him (it includes a particularly amusing incident involving Chairman Mao and a great big field of marijuana) … but this is also great because it breaks all the stupid rules about perspective that creative writing teachers seem obsessed with imposing. It’s essentially a thriller, but every chapter is told from a different point of view. And brilliantly. There’s all kinds of political shit going on which means he won’t probably ever be a Nobel Laureate – but he deserves to be.

Raiders’ Dawn – Alun Lewis
The first poet that I conned myself into thinking that I’d ‘discovered’ – with the help of my extraordinary adopted great aunt Dorothy who used to run a bookshop in pre- and post-war London. Said aunt left me first editions of this and ‘Ha! Ha! Amongst the Trumpets’ when she died and before I’d ever read a word of Lewis’ work. The title poem of this collection still sends shivers down my spine and the last few poems in the second volume are quite astonishing.

A Time of Gifts – Patrick Leigh Fermor
I’m not alone in picking this as being amongst the best travel books ever. To be honest, it’s in a league of its own. Only Norman Lewis’ ‘Naples ‘44’ gets anywhere close – and that’s not really a travel book anyway. PLF just observes everything with a precision and non-judgmental attitude (oh, OK, he is sometimes judgmental – but that’s usually only when he’s encountering drunken Nazis in a 1930s German beer hall), which is so refreshing in an age of opinionated Tripadvisor-style ‘reviews’ and high-concept travel bollocks. The second volume, ‘Between the Woods and the Water’, is arguably even better and the third, posthumous volume, ‘The Broken Road’, works surprisingly well, given that it was pieced together from fragments, diaries and whatever else.

The Complete Poems – Elizabeth Bishop
For a long time, EB was overshadowed by her somewhat self-obsessed friend Robert Lowell … thankfully, that’s been changing for a good while now and her own poems are being read properly and not as some kind of weird adjunct of the so-say ‘confessionals’ (with which she really has very little to do) or the decidedly macho how-big-is-your-novel-as-a-doorstop post-war American literary maleness (Lowell, Mailer, Vidal, blah di blah). Bishop isn’t a wannabe ‘great’ or a fake news panderer. Her every poem just sings in a light and gracious and unexpectedly deep way.

A Fine Balance – Rohinton Mistry
From my ‘epic novel’ phase … when I just wanted to read the longest, biggest novels ever (and yep, that contradicts entirely the previous note re: Elizabeth Bishop and the post-war American cock-centric boys) … This, though, is very different. A great story – and indeed a fine balance. Dickens with an added layer of humanity. The kind of novel that you just want to be immersed in forever. I read numerous other Indian novels after reading this – all of which were never less than engaging – but this is the one which really grabbed me and made me want to read and read and read …

Collected Essays, Letters & Journalism – George Orwell
Yeah, yeah, there’s ‘Animal Farm’ and ‘1984’ … Great though they are, much of Orwell’s best writing is here … in his second wife Sonia’s four-volume collection for Penguin which was still widely available when I was at school. I can remember gathering up these four volumes and reading them one by one and just thinking … Well, I’m not sure what I was thinking, but it probably involved me wanting to try and make my living as a writer and realising that you can write about just about anything if you want to and if you can see beyond the usual bollocks.