From I Went To Albania

We’ve just come out of the museum. We’ve seen a Chinese tank and exquisite Orthodox icons. Photographs of Zog – and a partisan jacket with a bullet hole. Embroidered traditional costumes – and a section of the communist border fence. The lists of people Hoxha had killed...

And in the corner of every room, an assistant sitting at a desk with a Bakelite telephone and an ashtray. It’s a museum where you can smoke ... And then, in the gift shop, Sam notices something. He’s lost his baseball cap. The Bakelite telephones start ringing – and before you know it every assistant in the museum, every curator of Illyrian artefacts, every expert in bourgeois reactionary monarchists is up on their feet. They’ve squashed out their fags, and they’re advancing through the priceless exhibits. They’re like lines of Highland beaters flushing pheasants from the heather... Even the woman at the front desk has abandoned her post to shout at the gardener – who’s weeding the treads of the Chinese tank in the yard – and get him looking for my son’s baseball cap. Everyone in the museum has dropped everything to look for my son’s baseball cap. Imagine the National Gallery grinding to a halt while the entire staff go in search of a Japanese tourist’s daughter’s friendship bracelet. They won’t give up until ... Ah, here it is. Here’s the baseball cap. Found underneath a sofa ...

The thing is, it’s like this everywhere we go. It’s as if everybody’s expecting us. I get the feeling the gunmen in Durrës would understand this better than we do.

'I Went To Albania' was first performed during Ferment at Bristol Old Vic. It's currently in development with Ferment and director Andy Burden.
Posted by Tom Phillips at 14:22 No comments:

As I've previously mentioned on this blog, I'm returning to Albania next month to work on the summer programme of the Balkan Peace Park Project (http://balkanspeacepark.org/), working with young people in the northern community of Vermosh to create a community play in two weeks and see it performed at the end of the programme. Vermosh is six hours' drive from the city of Shkodra, in the so-called Accursed Mountains, very close to the border between Albania and Montenegro. Three-four pages of photographs by someone who drove from Shkodra to Vermosh a couple of years ago are posted on the web here: http://www.panoramio.com/user/2518574?comment_page=8&photo_page=14

There are also photographs from the 2007 Vermosh Summer Festival on YouTube here: http://www.youtube.com/watch?v=9aLnIHA8OX8
And you can find out how to support our trip here: http://www.justgiving.com/Tom-Phillips5
Posted by Tom Phillips at 12:22 No comments:

A superb example of the genre: elaborate light and water patterns apparently choreographed to a soundtrack of Chopin etc in front of the most easterly (and one of the largest) Gothic churches in Europe. And the focus of both the daily promenade and civic pride - Kosiceans watch it with an avidity which can mean flippant tourists blocking the view by taking photographs are met with disapproving looks, tongue clicks and hisses - as, indeed, they probably should be.

Currently under repair, as this photo shows (the man in the suit is Saranda's mayor, Stefan Cipa, who's engaged in trying to prevent the transformation of a rather lovely south Albanian port into a Costa del Sol-style tourism-ruined hell hole). Like Kosice's, this one behaves according to an elaborate rhythm - although without the musical soundtrack - and also provides a focus for the evening promenade or xhiro. The multi-coloured, all-singing, all-dancing fountain in Tirana's Rinas Park is more obvious as a watery spectacle, but personally I prefer this one. Go here http://www.balkaninsight.com  for more on the 'tourist threat' to Saranda. 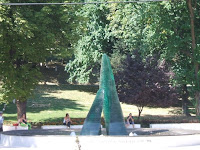 Not far from the WW2 eternal flame in central Sarajevo is this other memorial - to the children who were killed during the siege in the 1990s - which is, perhaps, all the more effective because at first it appears to be just another bit of municipal fountain whimsy until you read the plaque and realise what it commemorates. The incongruity of its serious purpose opposite a huge complex of shiny glass-fronted shops and cinemas only adds to its poignancy as a memorial.

Aesthetically, it's probably not one of the greatest, but the square it's in (overlooked by the famous 'black church' - so-called because it was nearly burnt down) has a gloriously relaxed atmosphere, to which this piece of optimistically angular watery architecture only adds (in a strange sort of way). It also acts as a magnet for every tourist in town: a perfect place to spot people hurriedly leafing through their copies of the Lonely Planet/Rough Guide to Romania. 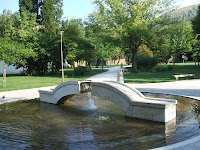 The siege of Mostar and the destruction of the famous bridge commemorated in fountain form in a park just off the former 'front line' and overlooked by gutted buildings. It's also a way off the tourist trail - possibly because its ambiguity sits uncomfortably. This bridge, after all, still has a gap in the middle.

Posted by Tom Phillips at 11:25 No comments:

More on 'Recreation Ground' the book

Namely, the info to be found at https://www.facebook.com/pages/Recreation-Ground/186966448096514 where you'll also find a sample poem and other comments.

Recreation Ground is the first full-length poetry collection by Tom Phillips, published by Two Rivers Press in 2012. ISBN 978-1-901677-85-0, 56 pp., £7.95. Cover design by Nadja Guggi with illustrations by Peter Hay. Text design by Nadja Guggi
Description
Tom Phillips’ first full-length collection navigates terrains which range from Eastern Europe, Australia and the Home Counties to his own back garden in Bristol.

From the different perspectives these vantage points offer, it unearths connections between chance meetings and ‘big history’, family stories and the state we’re in. It also looks at poetry itself as a ground on which to recreate–and negotiate with–one thing that nobody can change: the past.

‘In Tom Phillips’ work, the world is unsettlingly close, whether the poem is set in his home town or at the other end of Europe. Other times, too, are alongside in the present, and echoes of conflict or loss disturb the surfaces of life, which are nonetheless carefully, caringly observed in these intelligent and watchful poems.’-- Philip Gross

‘The landscape of Tom Phillips’ poetry is an “unexpected geography” within the contours of which we are reawakened to recognition that meaning amid a world of war and confusion is to be discovered in the unchanging nature of small things.’-- Ian Brinton

‘Those who have followed Tom Phillips’ steady progression over nearly thirty years value him as, in some real sense, the quietly spoken voice of a generation.’-- Tony Lewis-Jones 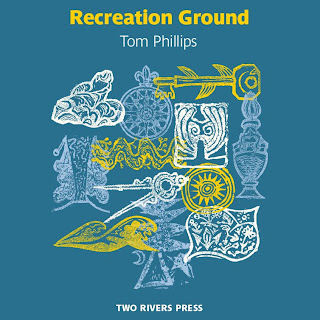 Posted by Tom Phillips at 14:26 No comments:

The problem with titles

As the plethora of poems with such illuminating titles as 'Untitled' or 'Sonnet' seems to suggest, coming up with a title constitutes something of a struggle for even the most hardened of poets. Paradoxically, I've been suffering from the opposite problem of late - loads of titles have been suggesting themselves but with no poem to go with them. Hence the blank or only partially filled spaces where 'Blues for my Home Town', 'Snail Weather', 'The Comfort of Railway Stations', 'Are you Sure you Want to do that?' and 'Gestures of Independence on Dogger Bank' might be. I'm not complaining. I'm just intrigued. Did Ashbery think of 'Self-portrait in a Convex Mirror' before he wrote the poem or afterwards?
Posted by Tom Phillips at 11:31 No comments:

'Recreation Ground', the book, approaches. Updates, reactions, reviews and details of launches and other events will be posted here: https://www.facebook.com/pages/Recreation-Ground/186966448096514
Posted by Tom Phillips at 13:24 No comments: