The launch issue of the all-new Shakespeare Magazine includes my piece on Shakespeare and Bristol, while there's a poem and paintings on 'Twelfth Night' at Colourful Star here.
Posted by Tom Phillips at 15:37 No comments:

When I picture it now, of course,
I can only picture it in the wrong season:
summer light on shop windows,
dusty pavements, the market’s
mosaic of fruit and veg,
gardens’ modest luxuries.

Not so hard to imagine you, though,
arm in arm on a familiar plaza –
or rummaging bookstalls,
drinking coffee, running for buses.
You’ll be laughing or breathless –
or both. On the bridge where
dual carriageway headlights
flash an eerie glamour,
it’ll be as if past differences
were nothing more than blank spaces
on a map of the constellations.

Paintings and poem for Flower Day

There's new work at Colourful Star this week - writing and painting to mark Bulgaria's Flower Day (Sun 13 Apr). You can click through to it here. 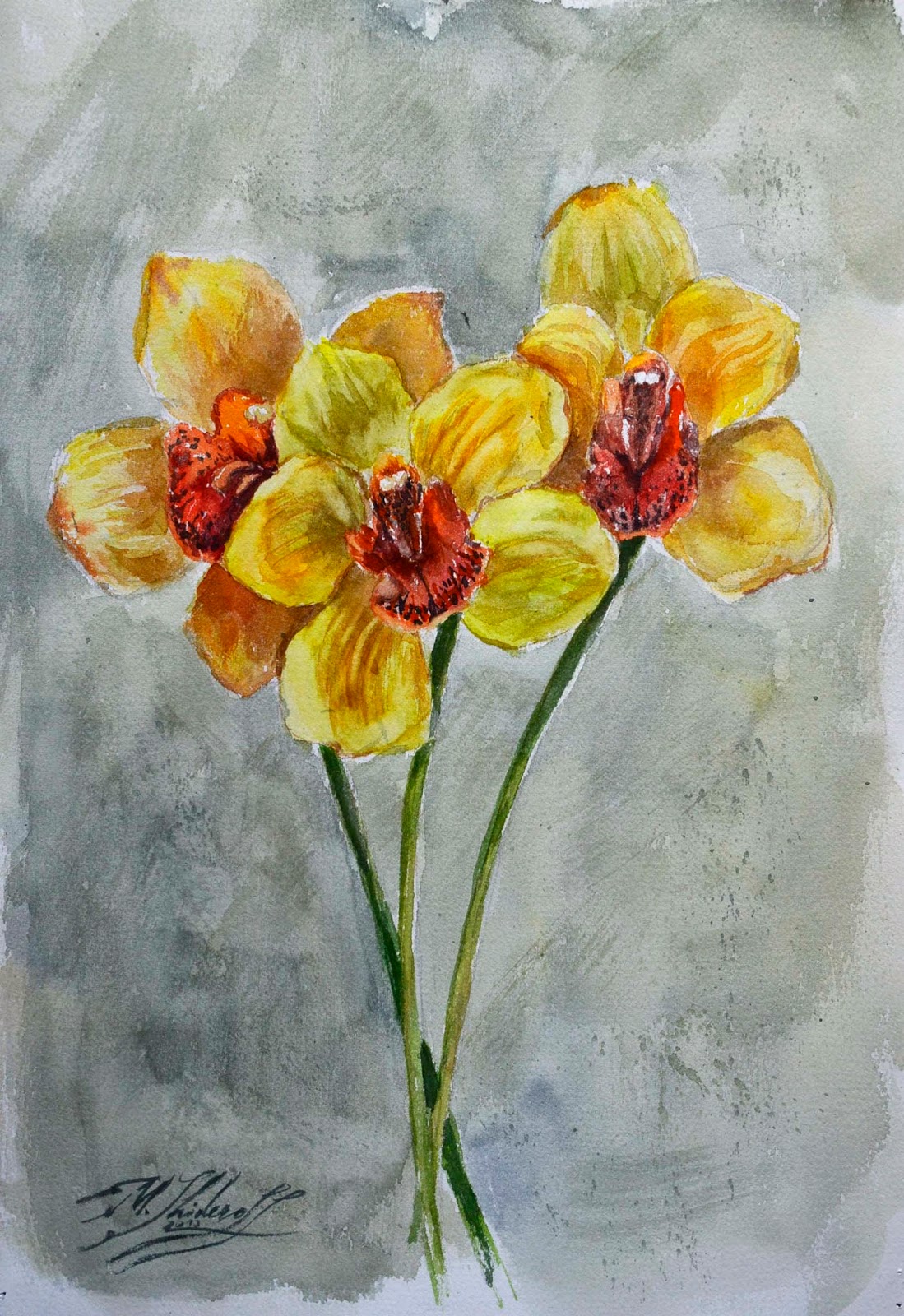 Flower Day - which always falls on Palm Sunday - is one of Bulgaria's 'name days', but while most such days are associated with particular saints or historical events, this one is for all those whose names derive from flowers. Traditionally, name day celebrations involve keeping open house, preparing food and drink for the friends and relatives who call round to wish you well. A bit like a birthday, a name day is a sort of personal holiday - but unlike a birthday, guests can turn up uninvited.

About Colourful Star
Colourful Star began with a conversation around a kitchen table in Sofia. Sisters Marina and Vasilena Shiderovi decided they wanted to start an online project which would combine Marina’s paintings with short articles, stories and other texts. Having met Bristol-based writer Tom Phillips by chance, they asked him if he’d like to get involved, and the three set about discussing how an Anglo-Bulgarian art-and-writing collaboration might work. By early 2014, Marina had designed the logo and the webpage, Colourful Star was ready and the project was launched online on 23 January. New collaborations are now published every Friday, with additional postings to mark occasions such as Baba Marta, International Women’s Day/Mother’s Day, Easter and so on.


As well as simply bringing together visual art with poetry and prose, Colourful Star is about exploring and celebrating the possibilities of collaboration between artists and writers living in different parts of Europe. Texts and paintings are created in response to each other, or – as in the case of the post for Baba Marta (1 March 2014) – in response to a common idea or occasion. Although there is no overall theme, one strand which has begun to emerge is work reflecting on the similarities and differences between Bulgarian and British traditions.

Image: Marina Shiderova
Posted by Tom Phillips at 02:18 No comments:

On having received an email from David Cameron

Dear David,
Thank you so much for your email. It is interesting to hear your views on Europe, no matter how vague and ill-conceived they seem to be.
I'm very glad to see, for example, that you are not aligning yourself with the populist xenophobia expressed by UKIP - who, as you rightly say, are in no position to deliver on their promise of parochialising a Britain which, in an ideal world, might one day actually adopt a generous, hospitable and enriching cosmopolitanism. Unfortunately, of course, in this kind of open-minded Britain there won't be room for a Conservative Party which begins its randomly circulated emails with lines such as 'The EU is heading in a direction Britain never signed up to' (largely because said ideal Britain won't be looking to blame Brussels for everything that it's cocked up itself - and would know that ending a sentence with a preposition is deeply unpatriotic) - but, hey, that's a small price to pay for actual real democracy, I would have thought.
There do, though, seem to be a few minor factual errors in your email which you may wish to address before you send it out to everyone whose email address you've been able to snaffle from the internet by exploiting the vagaries of the Data Protection Act.
'Benefit tourism', for example, is a phrase which appears to have been invented by your own press office. Call me an old-fashioned woolly liberal if you must, but I have actually spoken to many of the people that you insist on referring to as 'foreigners' and it seems that claiming benefits, lying on a trolley in the corridor of an underfunded NHS hospital and having to live in poorly maintained social housing are about the last things on their mind. In fact, amazingly (well, I expect it's amazing to you), they appear to contribute to the economy and more than compensate for the British 'benefit tourists' who are currently claiming millions in Germany and elsewhere. If you want to secure the British pensioners' vote, by the way - forget Bournemouth. Most of 'our' pensioners now appear to be living in holiday resorts from the Costa del Sol to the Black Sea. Apparently, EU regulations mean that they can do this and still claim their pensions. Given that you have obviously thought long and hard about how Britain's departure from the EU would affect its citizens, you are probably already aware of this.
Re: point 2 - "Securing more trade but not an 'ever closer union'": isn't that a contradiction in terms? Isn't a 'closer union' good for trade? Or are you thinking of adopting the policy of earlier British governments - i.e. securing more trade through the simple measure of invasion? That would certainly be a 'closer union' - and, let's face it, it seems to be working for your great mate Vladimir Putin.
I wouldn't worry too much about 'justice and home affairs' either. To be honest, you seem to be doing a more than adequate job of ensuring that anything to do with the law is swathed in almost completely impenetrable bureaucracy and that Britain's own affairs are safe in the hands of people who went to some kind of big, swanky public school in Berkshire and/or made their own fortunes by selling 'financial packages' to the gullible in the mid-1990s. What an inspired gesture, by the way, to replace that dreadful Miller woman as Minister of Culture! Appointing a former banker is self-evidently the way forward. I'm sure he'll know loads of stuff about the arts which will place Britain at the forefront of the international stage (that's a thing where theatre happens, by the way, in case you or he weren't sure).
As for 'getting a better deal for British taxpayers', has it ever occurred to you that it might be easier to do this by cutting your own salaries and expense accounts? Or, indeed, putting irresponsible financiers in the dock and giving them the kind of disproportionate sentences you currently reserve for people in hoodies who knick stuff from shops or sell a bit of skunk to undercover journalists? I'm sure we could work out a reasonable tarif - maybe ten years for every million embezzled and tucked away in an off-shore account? Again, of course, this might have a slightly damaging effect on the support for your party, but, as I said before - hey, that's democracy.
Thank you, too, for giving me 'the final decision' on Britain's membership of the EU. It's a shame, of course, that 'final decision' sounds a little bit like 'final solution', but I'm sure that your PR people will be across this going forward. It's a shame, too, of course, that, in even asking the question, you'll be unleashing even more xenophobic nonsense from the likes of UKIP and the Daily Mail. But, hey, needs must when you're a party whose whole attitude to running the country has been to pander to the darkest passions of an imaginary white van man who lives in an imaginary Essex. Maybe, on the eve of your proposed referendum, you should just give everyone a free case of beer (although obviously not Stella Artois, Guinness and other 'foreign' stuff) and hope that, when pissed, even sensible people decide that we're all going to hell in a handcart.
I hope these thoughts will be of use and that you will not hesitate to contact me if you have any questions. Unfortunately, my reply may be slightly delayed. Wouldn't you just know it - as a hard-working family (that was your term, wasn't it?), we seem to be having more luck getting work in other EU countries than we do here.
All best wishes,
Tom


PS Are you sure about using the word 'austerity' to describe the state we're in? How about 'under-performancing'? It's not actually a word, but then why should that matter? 'Gove' isn't a word, either, and you've put him in charge of education!
Posted by Tom Phillips at 12:17 No comments:

All summer it was like a miracle,
the dust coating cars and running
your finger through sand they said
had blown in from the Sahara.
Drivers cursed. It was a summer
of talk. Of incidents, evacuations,
populations gridlocking ring roads,
four-minute warnings, the hottest season
of their Cold War. We didn’t care.
We were racing through the woods
while parents stocked up on tins
and candles and stared at the radio
with palms against their throats
as if by suddenly tightening their grip
they could hold their little faith in.
There was no rain, only sand,
only sand coming down like scurf,
like unexpected snow from Archangel,
like the ashes from Omaha burning.

'There’s been word in the village, perhaps,
And these first few cautious days have passed.'

There's a new poem, written to accompany a painting of a young Bulgarian woman by Marina Shiderova, now up on our online collaborative project Colourful Star. You can click through to it here.
Posted by Tom Phillips at 08:03 No comments: